Vanderpump Rules star Scheana Shay delighted her 1.3 million Instagram followers on Friday with a surprise announcement of her engagement to long-time boyfriend Brock Davies and a peek at her non-traditional engagement ring highlighted by a 12.74-carat pink morganite. 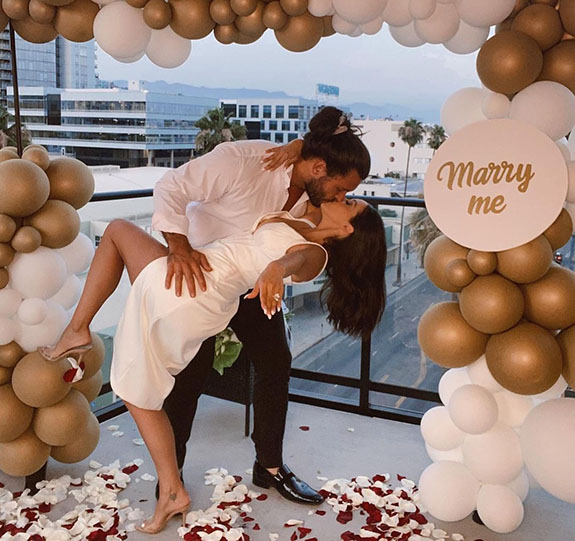 In a post punctuated by a ring emoji, Shay wrote, “I SAID YES!!!!! We are engaged!!! Thank you to @brock__davies for making me the happiest girl in the world and to @kylechandesign for making me the most gorgeous ring ever!!”

The photo shows Shay and her muscle-bound personal trainer fiancé sharing a kiss on a balcony decorated with rose petals, balloons and a sign that reads "Marry Me." Davies leans Shay backwards in a deep dip while she stretches her ring hand out to the camera.

Shay told People magazine that Davies gave her a love letter and bouquet of flowers before proposing on one knee. 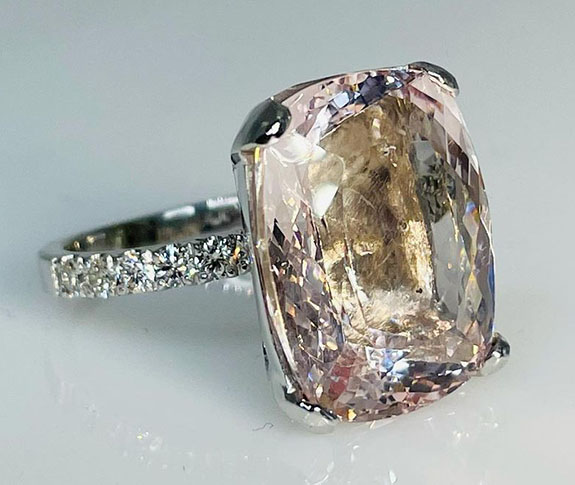 On his own Instagram page, designer Kyle Chan, posted detailed photos of the 14-karat white gold ring. He described the center stone as a "perfect rectangular cushion" that possesses a "rare pink reflect and insane fire." He added that morganite is about Divine Love.

"Pure and simple, it is representative of unconditional love," he wrote.

To add a little dazzle to the piece, the designer set the band with 12 round diamonds.

Over the past 10 years, morganite has emerged from obscurity to become a popular alternative engagement gemstone.

In The Knot’s 2019 Jewelry and Engagement Study, morganite was mentioned as a colored stone favorite. While 83% of those surveyed said they preferred a traditional diamond center stone, 10% chose “other precious stones.” Of that group, morganite was preferred by 12% of respondents, just behind sapphire at 18%.

Morganite is a member of the beryl family of gemstones, which includes emerald and aquamarine. Once known simply as pink beryl, the gemstone got its current name in 1911 when the famous New York gemologist G. F. Kunz recommended that the pretty pink stone be named for banker and mineral collector John Pierpont Morgan. The New York Academy of Sciences agreed and the pink variety of beryl was officially designated as “morganite.”

Shay and Davies started dating in late 2019 and share a daughter, Summer Moon, who was born in April of this year. Shay reportedly wants to celebrate her nuptials in Bali, although no date has been set. Shay will return for Season 9 of Vanderpump Rules, which premieres this fall on Bravo.