We think it's fair to say that the Transportation Security Administration (TSA) is VERY good at finding loose diamonds. 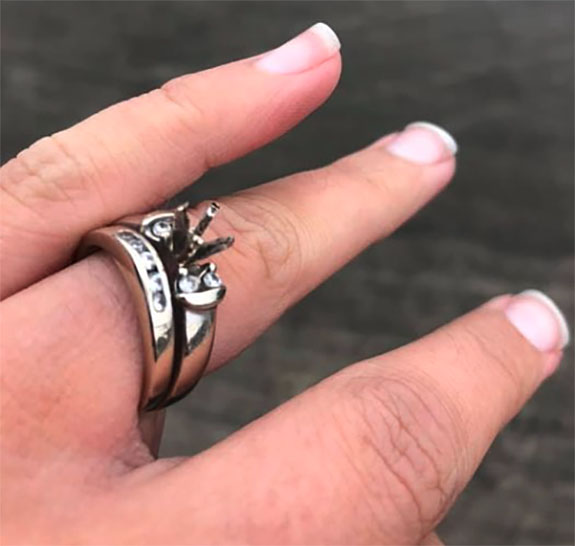 Last week, we recounted the story of how the TSA reunited distraught newlyweds with a diamond lost at a security checkpoint at JFK International Airport in New York City. Today, we tell the story of how a former Mrs. Alaska was reunited with a very sentimental diamond that popped out of her ring in the baggage claim area of Ketchikan Airport 3,400 miles away in Alaska.

Danielle Wakefield, Mrs. Alaska 2017 and assistant coach for the Anchorage-based Nunaka Valley Little League softball team, flew to Ketchikan to participate in a state softball youth tournament last week. Wakefield exited the airport without realizing that the center diamond of her engagement ring — a diamond given to her by her late father — somehow got dislodged.

Wakefield's trip to the tournament required a ferry ride, and that's when she noticed her diamond was missing.

“By the time I had gotten off the ferry, I felt my ring — and my diamond was gone,” she told the Ketchikan Daily News. “I couldn’t go back.”

On the suggestion of her mother, Wakefield turned to Facebook to get the message out about her lost diamond.

In a post punctuated by two blue heart emojis and a sobbing face emoji, Wakefield wrote, "I lost my diamond in Ketchikan, Alaska between Alaska Airlines flight 64 and the ferry drop off on the other side of the channel between 4:45 pm and 5:15 pm on July 15, 2021. It would not be that big of a deal but this is the only thing I have from my late father and I’m really upset. I know it’s a long shot but I thought I would post and see if it could make it far enough to get to the person who who might find my diamond. If you found a diamond in this area, please return it to me. If you are my friend in Alaska please share! You might know someone who knows someone." 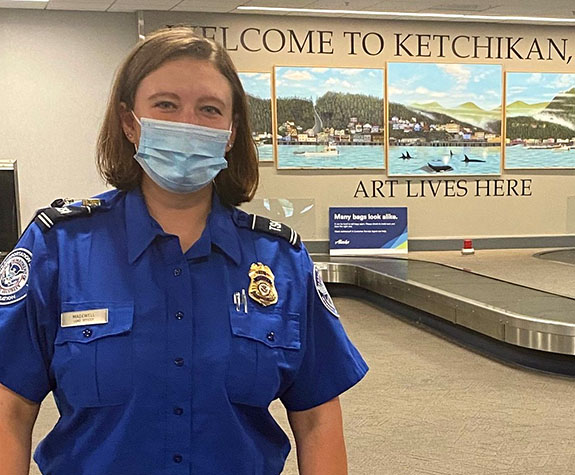 The post was widely shared by Facebook users in Ketchikan and soon caught the eye of Ketchikan Lead TSA Officer Destiny Madewell, who immediately shared the post so her friends who work at the airport would see it, and increase the chances of them finding the missing diamond.

“Looking for a lost diamond at the airport was the proverbial ‘needle in a haystack,’ but I knew from the Facebook post that the diamond had sentimental value to the owner. It had been given to her by her late father,” said Madewell. “I wanted to help in any way I could, to get the word out among the Ketchikan airport community.”

According to the TSA, later that same day as Madewell was wrapping up her shift, she went downstairs to confirm the checked baggage screening area was secured for the evening. While returning to the security checkpoint upstairs, she walked through the baggage claim area. 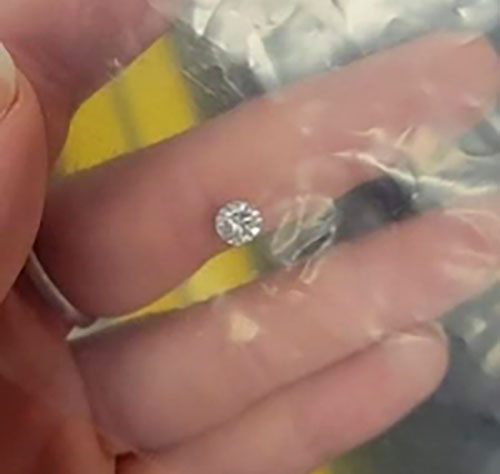 Something sparkling on the floor caught her eye. She took a closer look and was shocked it was the diamond described in the Facebook post.

Wakefield had been at the baggage claim about 24 hours earlier. Remarkably, the diamond had remained on the floor, undisturbed — and unnoticed — by an estimated 500 people who had been through that area of the airport after since the previous evening.

“I took the diamond upstairs and showed it to my supervisor who was aware of the Facebook post,” said Madewell. “We immediately reached out to the traveler to begin the process of reuniting her with the diamond.”

Wakefield got her diamond back in time for her to catch her flight back to Anchorage.

Returning to Facebook to update her friends about her good fortune, Wakefield also related how the spirit of her late father may have influenced the outcome.

"Thank you to everyone who shared my post!!" she wrote. "My diamond was FOUND and returned to me today by a complete stranger who saw my post shared (Destiny Madewell) and found it right before it got vacuumed up. Immediately after it was returned to me 2 Bald Eagles flew over my head. Bald Eagles are a sign of my dad – they always come at important moments."

Wakefield wrote that she was "beyond thankful."

"I can’t believe it," she continued. "Grateful doesn’t even cover it."

“We train our employees to be alert in all situations and in all aspects of their job," said Federal Security Director for Alaska Pete Duffy. "This training paid off! I am so proud of the KTN (Ketchikan Airport) TSA team, their integrity and ongoing commitment to the community. They make a positive difference in so many ways, every single day.”