With their family's home reduced to ashes in the aftermath of the deadly Carr wildfire, Jerry Ogle and his dad returned to their property off Iron Mountain Road in Redding, Calif., with the hopes of finding a very special heirloom amidst the devastation. It was Ogle's grandmother's engagement ring — a precious gift given to him by his grandfather just before he passed away.

More than 1,000 homes were completely destroyed and nearly 40,000 people were forced to evacuate when the wildfire tore through the Northern California city earlier this month.

"My only real hope was that I would miraculously find the diamond in the ash," Ogle wrote on Facebook. 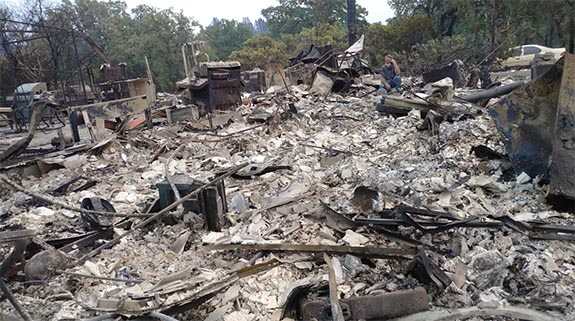 Based on the footprint of where the house had been, Ogle knew approximately where to look for the ring. But after a half-hour of searching, he had still come up empty.

But, then, Ogle turned to the heavens.

"I looked to the sky and asked my grandfather for help," Ogle recounted in his Facebook post. "Not 30 seconds later I found the box — the same box that [the ring] was given to me in. And inside the box, amongst the ash, there it was. My grandmother's ring. God is good. Thank you for the help granddad!"

A wildfire can reach a temperature of about 1,400 degrees Fahrenheit, but that inferno was still no match for his grandma's ring, photos of which Ogle proudly posted on Facebook. The center stone looked perfect and the precious metal was just a bit charred. The ring box didn't fare as well, but could be responsible for adding a layer a protection that helped the ring survive the fire.

Ogle has established a GoFundMe page to help his dad rebuild a home that carried 17 years of memories. Sadly, this is the second home his dad has lost to a fire. The first one was destroyed 25 years ago. As of yesterday, the GoFundMe page had generated contributions totaling more than $8,000.

Wrote Ogle, "All gone in a matter of days. Not to mention all of our other family and close friends in the neighborhood who lost their memories as well. We will stay strong and we will rebuild. If you can help or share we would greatly appreciate it. Thank you!"

The post Wildfire Reduces His Family’s Home to Rubble, But His Grandma’s Ring Rises From the Ashes appeared first on Diamond Designs | Orange, CT Jewelry Store.