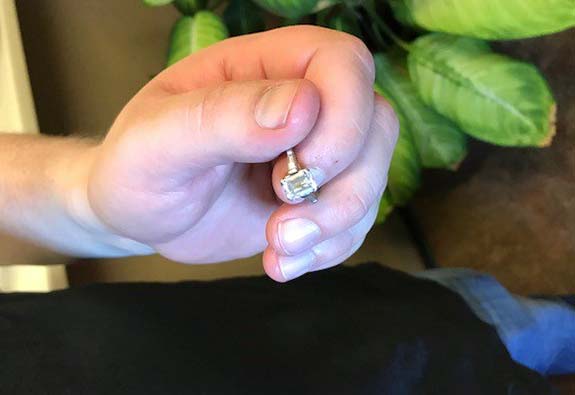 Typically, the nasty process of digging through mountains of stinky trash bags in a hazmat suit could take many hours, and there's never a guarantee that the jewelry will be found at all. But, the staffers of the San Diego Environmental Services Department (ESD) implemented a clever plan that yielded a ring recovery in about the time it will take you to read this story.

Early last week, a San Diego family mistakenly discarded a valuable emerald-cut diamond ring during a summer cleaning spree. By the time they realized the ring was gone, their trash already had been carted away. They immediately contacted the San Diego ESD, which used GPS tracking to locate the truck that served their neighborhood. The officials determined that the truck had just arrived at the city landfill.

The driver was ordered to drop the load in a specific location that would isolate it from other trash at the facility.

The ring's owner and her husband rushed to the Miramar Landfill, where their search was assisted by San Diego ESD employees. Within four minutes, the job was done.

"Sometimes it takes three, four hours for them to find it," city spokesman Jose Ysea told ABC-affiliate KGTV. "Sometimes they don't find it at all. So to have them find something… in under four minutes, that was pretty good."

Ysea added that the employees who helped the couple look through the load were just ecstatic that they were able to find it, especially so quickly.

Proud City of San Diego officials teased the story on both Twitter and Facebook. Accompanying two photos of the owner reuniting with her recovered ring was this caption: "What happens when a $30K ring gets accidentally tossed in the trash? You hope City staff can track it down! Luckily, @SanDiegoESD found the truck and helped find the precious ring. True story!"