The Letšeng mine in the tiny southern African kingdom of Lesotho has produced another colossal gem-quality diamond. The 442-carat, Type IIa stone could be worth as much as $18 million.

The still-unnamed rough gem is the fifth-largest gem-quality diamond ever unearthed at Letšeng, a mine that is recognized as the highest dollar-per-carat kimberlite mine in the world.

Despite having a land mass slightly smaller than Maryland, Lesotho is an international powerhouse when it comes to turning out huge, top-quality stones. Some of Letšeng’s most impressive finds include the Lesotho Legend (910 carats), Lesotho Promise (603 carats), Letšeng Star (550 carats) and Lesotho Legacy (493 carats). Of the largest 50 rough diamonds ever discovered, nine have come from Lesotho.

While mining company Gem Diamonds didn’t place a value on the 442-carat rough gem, a mining-industry analyst told bloomberg.com that is was worth about $18 million, based on recent sales of similar Type IIa stones. 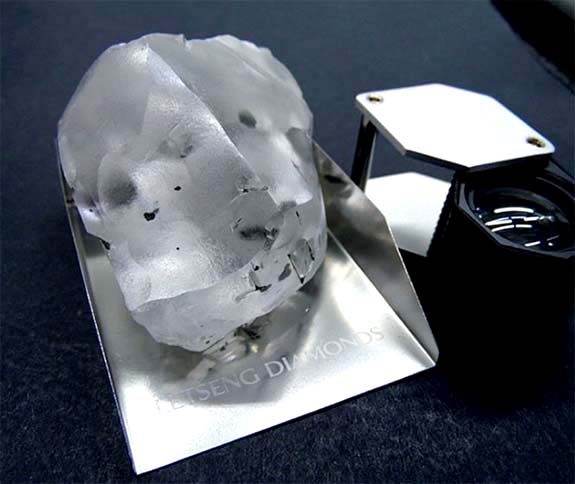 In 2018, the Lesotho Legend (about twice the weight of the newest discovery) was sold for $40 million. The 1,109-carat Lesedi La Rona (#3 on the all-time list) fetched $53 million in September of 2017, while the 812-carat Constellation (#8 on the all-time list) was sold for $63 million in May of 2016. All were D-color, Type IIa diamonds, which means they were colorless and chemically pure with no traces of nitrogen or boron impurities.

Since Gem Diamonds acquired the mine in 2006, Letšeng has produced more than 60 100-plus-carat diamonds.

“The recovery of this remarkable 442-carat diamond, one of the world’s largest gem-quality diamonds to be recovered this year, is further confirmation of the caliber of the Letšeng mine and its ability to consistently produce large, high-quality diamonds,” noted Gem Diamonds CEO Clifford Elphick. “It is also a fitting testament to the dedication of the employees in the Group to have recovered such an extraordinary diamond, whilst at the same time maintaining strict adherence to health and safety precautions during the global Covid pandemic.”

The Gem Diamonds executive also reported that a portion of the proceeds from the sale of this diamond will be used to fund a special community project.

The United Kingdom-based Gem Diamonds holds a 70% stake in the Letšeng mine with the government of Lesotho owning the remaining 30%. In October 2019, the partners renewed the mining lease for another 10 years.