Hustling to meet a billionaire's December 31 deadline, Israeli luxury brand Yvel has assembled a team of 25 jewelers and diamond setters to fabricate a COVID-19 protective mask decorated with 3,608 black and white diamonds. 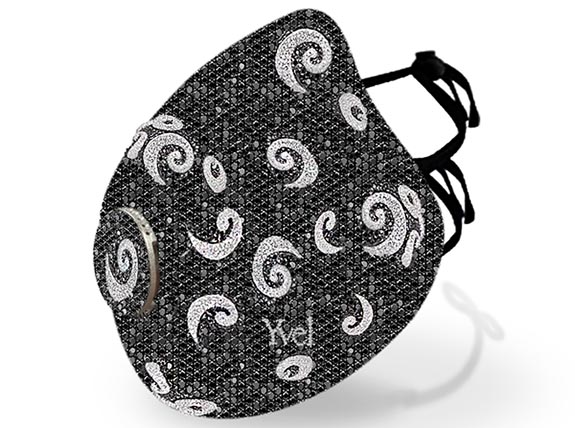 The team will be working in shifts to complete the bespoke mask, which is valued at $1.5 million and is being billed as the most expensive protective mask in the world.

Designed by Orna and Isaac Levy, the face gear will be made of 250 grams (8.8 ounces) of 18-karat gold and boasts a diamond total weight of 210 carats.

Isaac Levy said the order for the wearable art was commissioned by a Shanghai billionaire who remains anonymous.

The billionaire is asking the Levys to meet three conditions: The mask must be certified by the U.S. Food and Drug Administration (FDA) and European authorities for having the highest level of filtration (N-99); it must be delivered before December 31, 2020; and it has to be the most expensive in the world.

In a press release, the company revealed that the billionaire art collector has been an Yvel customer for decades and that the mask was ordered as an act of financial support for the company and its 150 employees in Israel and the U.S.

Yvel had been forced to cease operations temporarily due to the COVID-19 pandemic.

“For a lot of people around the world it may be the most expensive mask in the world, and maybe that’s a really big thing,” Isaac Levy told The Independent. “For us, it’s a way to protect the positions of the people in the factory in order for them to be able to support their families.”

The post $1.5 Million Diamond-Studded Protective Mask Is the Most Expensive in the World appeared first on Diamond Designs | Orange, CT Jewelry Store.