Two buddies with a passion for treasure hunting unearthed four 2,500-year-old golden torcs within the parish of Leekfrith (pop. 363) in the English countryside. 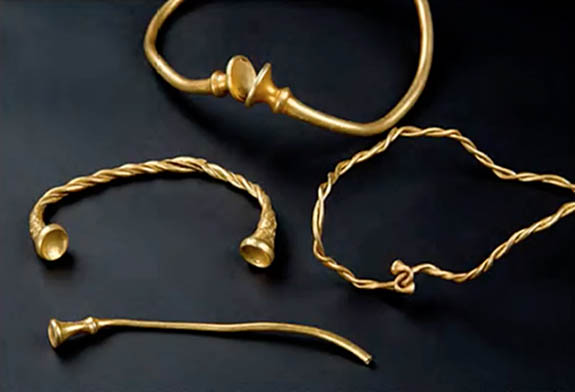 The items, which include three neck torcs and one bracelet weighing between 1 ounce and 8 ounces, may date back to 400 BC and represent the earliest Iron Age gold work ever discovered in Britain. An antiquities expert called the Iron Age torcs a “unique find of international importance.” 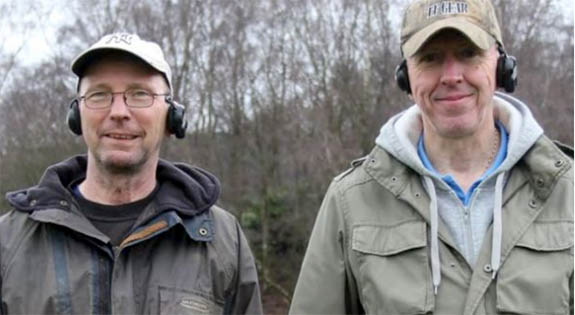 British metal detectorist buddies Joe Kania and Mark Hambleton found their bounty in a field about 30 miles southeast of Manchester. Each item was buried just under the surface about one meter apart from the next.

Hambleton explained to the BBC that he and Kania were searching a field back in December, but had come up empty. Hambleton was just about to quit for the day when his friend approached with a golden surprise. 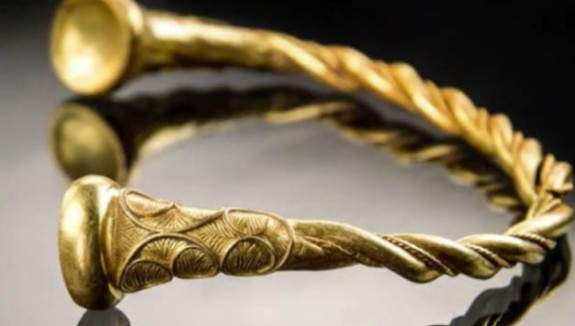 “He pulled this big torc out of his pocket and dangled it in front of me,” Hambleton said. “When I’d gotten some air back into my lungs, my head had cleared and my legs had stopped wobbling, I said, ‘Do you realize what you’ve found there?'”

The discovery of the large torc led the treasure hunters to the three other items, each of which was determined to be crafted of at least 80% gold. 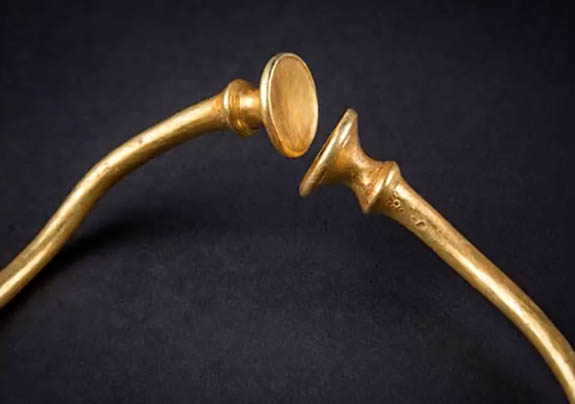 “The torcs were probably worn by wealthy and powerful women, perhaps people from the [European] continent who had married into the local community,” surmised Dr. Julia Farley, the British Museum’s curator of British and European Iron Age collections. “Piecing together how these objects came to be carefully buried in a Staffordshire field will give us an invaluable insight into life in Iron Age Britain.”

The fabulous Leekfrith Iron Age torcs will be exhibited for the next three weeks at the Potteries Museum and Art Gallery in Stoke, a short distance from where they were discovered.

“This amazing find of gold torcs in the north of the county is quite simply magical, and we look forward to sharing the secrets and story they hold in the years to come,” said Staffordshire County Council Leader Philip Atkins in a statement.

The UK’s Treasure Act of 1996 states that finders have a legal obligation to report all potential treasure to the local coroner in the district where the find was made. The Act allows a national or local museum to acquire the treasure for the public’s benefit and pay a reward, which is usually shared equally between the finder and landowner. The value of the four golden torcs will be determined by experts at the British Museum.