An estimated 3 billion people worldwide tuned in Saturday to see American Meghan Markle tie the knot with Prince Harry of Wales, and much of the buzz about the romantic royal nuptials was focused squarely upon the bride’s diamond tiara. 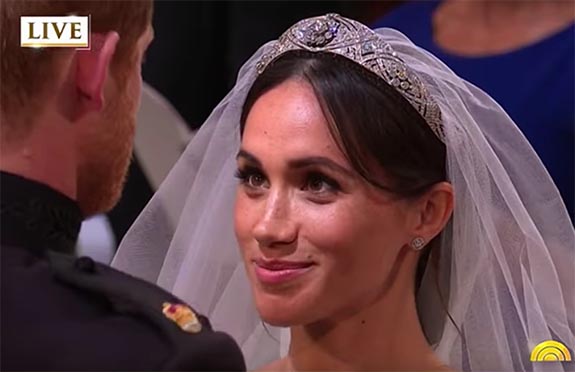 Holding Markle’s veil in place was the Queen Mary Diamond Bandeau Tiara — a stunning piece lent to the young bride by 92-year-old Queen Elizabeth II. The platinum tiara was originally made for Queen Mary in 1932 and incorporates a removable center brooch that dates back to 1893.

The platinum tiara is formed as a flexible band of 11 sections, each glittering with large and small brilliant-cut diamonds. The tiara was specifically designed to accommodate the center brooch, which is set with 10 diamonds, according to an official press release.

The brooch had been gifted to then-Princess Mary in 1893 by the County of Lincoln on the occasion of her marriage to Prince George, Duke of York. The bandeau and the brooch were bequeathed by Queen Mary to Queen Elizabeth II in 1953. Queen Elizabeth is the longest-reigning British monarch.

Prior to Saturday’s royal wedding, there was some speculation that the bride might forgo tradition and have a new tiara designed for the occasion. In the end, Markle decided to pay homage to her new family by wearing an accessory from the Queen’s jewelry collection.

The bride’s Welch gold wedding band also reflects a long-standing royal tradition. For the past century, royal wedding bands have been crafted from rare Welsh gold, sourced at the Clogau mine in Bontddu, Wales. The mine dates back to the Bronze Age, and commercial mining began there in the mid-1880s, according to a report by CBS News.

The mine was closed in the 1990s, but Queen Elizabeth II had received a kilogram of the rare gold for her 60th birthday in 1986. CBS reported that the Queen’s reserves have been the source of royal wedding bands ever since. While the bride will be wearing a gold wedding band, Prince Harry opted for a platinum band with a textured finish.