Described as a “miracle that came out of tragedy,” Texas newlyweds Ariel and Justin Duke were reunited with Ariel’s engagement ring and wedding band eight days after a deadly tornado flattened their home and scattered debris for miles.

Having learned of the couple’s plight on Facebook, amateur metal-detector enthusiast and Good Samaritan Nathan Wright meticulously scanned the Dukes’ devastated property for five hours before finally scoring both rings.

Ariel told Spectrum News that she removed her rings to do some yard work just before the twister obliterated their small, yellow farmhouse in Canton on April 29.

In the aftermath of the storm, the couple — who had been married only three months — attempted to recover Ariel’s precious keepsakes with the help of some friends, but they came up empty.

Their next strategy was to post photos of the rings to Facebook, hoping that someone would find and return them.

“By the time I had come across [the Facebook post] they had kind of given up,” Wright told ABC News. “It was about eight days since [the tornado] happened and they had a bunch of people out there using rakes and doing everything they could to find [the rings].”

Wright explained that it’s very difficult to use a metal detector in an area where debris is strewn everywhere, but the small chance of finding the rings was “worth a shot.”

After three hours, Wright’s search had yielded just a bunch of bullets and pull tabs.

But then, in a grassy field about 100 yards from where the house used to be, he finally started finding coins and kitchen utensils. 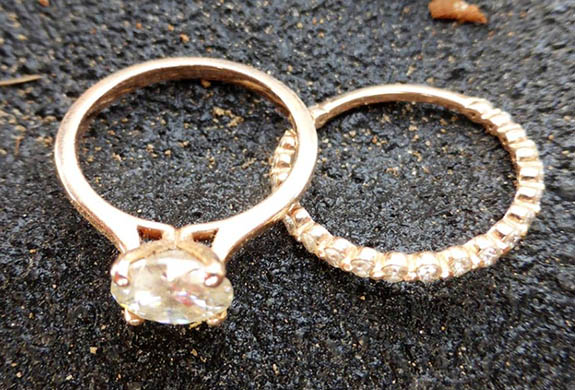 “Then I found an earring!” Wright wrote on Facebook. “I was excited, thinking maybe I was getting in the right area. I was praying this whole time that I’d be to find this ring and give some happiness back to this girl after such a rough week. Finally, I bent down to pick up what I thought would be another pull tab and, BAM, I see the gold ring laying under the grass! I hollered out and thanked the Lord!”

Wright had discovered Ariel’s engagement ring. Shortly after, about 30 feet away, he detected Ariel’s wedding band, as well.

“I bent down and knew the gold looked exactly like the engagement ring,” Wright said. “To be able to find both of those in the debris-strewn field like that was unreal. I’ll remember that forever.”

Wright explained on Facebook how he teased Ariel, by revealing the wedding band, at first, but not the engagement ring.

“I showed her the small wedding band first and said, ‘I found your ring!’ She was very excited but you could tell she was hoping for the other one,” he wrote. “Then I pulled the other one out of my pocket. She screamed and bulldozed me with a big hug! She couldn’t believe I found both of them. I’m so happy to be able to get these back to her!

“There is a miracle that can come out of tragedy,” Justin told ABC News. “It seemed like we were on downward spiral, but with him finding the rings, we’re on an upswing and getting on with life. We’re going to see what the good Lord has in store for us.”

On Facebook, Ariel posted photos related to ring recovery, as well as a message directed to Wright: “Thanks again for all of your hard work and determination! It’s nice to have some miracles from a tragedy. God sent Nathan out for a reason and we couldn’t be more blessed! God is good!”