In a video that’s currently tearing up the internet, Culinary Institute of America student Alex O’Brien Yeatts redefines the term “rock candy” as he takes a hammer and cleaver to a giant chocolate geode. After five powerful hits, the boulder-like object cracks in half to reveal a gorgeous formation of sugar crystals that could easily be mistaken for amethysts. 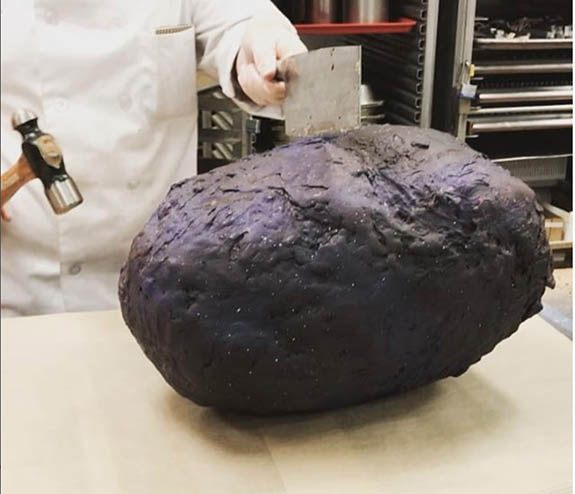 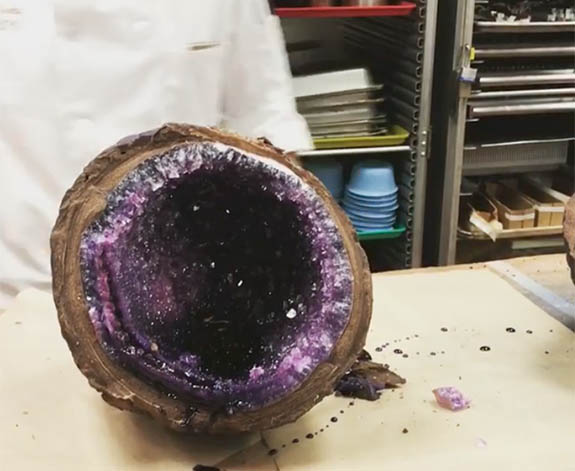 Yeatts worked with fellow student Abby Lee Wilcox on a six-month school project to create a series of chocolate geodes, the largest of which weighed 50 pounds.

The 20-year-old Yeatts told Insider how he and his associate poured tempered chocolate into egg-shaped molds and then filled these shapes with colorful, concentrated sugar syrup. Over the next six months, the pair carefully rotated the eggs on a daily basis to ensure maximum crystal growth. As the syrup slowly evaporated, it transitioned from a liquid to a solid.

“During the process, you don’t know what’s going on inside the eggs,” Yeatts told Insider. “You know they’re growing, but you don’t really know what they’re going to look like until you crack them open.”

The moment of truth couldn’t have been more spectacular.

“You could kind of see everybody’s jaw drop,” Yeatts told Insider. “It was a pretty incredible moment.”

The purple crystals were beautifully formed and the colors were vivid. A bit of the syrup was still in liquid form. Eleven other chocolate geodes yielded equally stunning results in colors that included deep purples and rich oranges.

Yeatts, a baking and pastry student at the Hyde Park, N.Y.-based school, posted a series of candy geode photos and videos on his Instagram page.

Also, check out the video by Insider, below.