When Ben Adams and his girlfriend Elizabeth Kahle landed at DFW International Airport three weeks ago after a romantic European vacation, Adams was all set to surprise the love of his life with an engagement ring and marriage proposal. 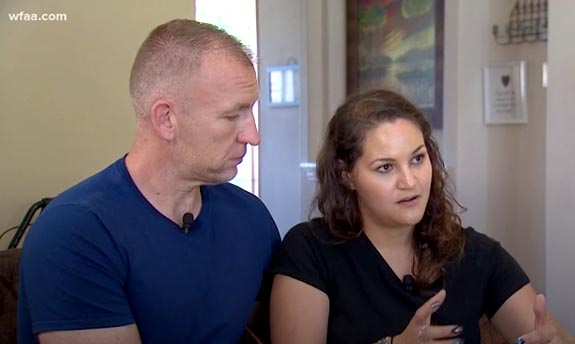 That plan got short-circuited when the airline misplaced their luggage and Adams had made the critical mistake of packing the engagement ring in his checked baggage instead of placing it in his carry-on.

Earlier in the journey, the couple had been waiting for their connection in Iceland when they learned that their flight to DFW Airport in Dallas had been canceled. They were re-routed to JFK Airport in New York and then finally got a Delta flight to Texas that connected through Atlanta.

With all the changes and crazy connections, the couple made it to Texas but the luggage did not. For more than two weeks WOW Airlines couldn't tell the them where their luggage had ended up.

Both Adams and Kahle work for Norwegian Cruise Lines and don't really have a permanent residence. Kahle has family in Frisco, Texas, and that's why Adams wanted to propose when they landed, so they could all celebrate together.

Instead, Adams reached out to local ABC affiliate WFAA to reveal his proposal secret and plead his case.

“The stakes just went from here to here!” Kahle said in the interview.

With the helpful prodding of the TV station, WOW was able to find the luggage, which had somehow ended up in Boston.

“We didn’t even go through Boston,” Adams said.

The luggage was forwarded to Texas, where Adams was finally able to pop the question. WFAA was on hand to document the moment and deliver a happy-ending story to its viewers.

“The only reason we got our bags back immediately is because you guys reached out to WOW Airlines,” Adams said. “I get to go back to the ship with my future wife and I’m so ecstatic.”

Of course, all the drama could have been avoided had Adams heeded these tips from the Transportation Security Administration (TSA) and Jewelers Mutual Insurance Company regarding how to handle fine jewelry when traveling…

TSA blogger Bob Burns noted that under no circumstances should travelers pack their fine jewelry in checked luggage.

"It’s perfectly OK to wear your fine jewelry through the checkpoint station," he wrote. "As long as the jewelry is not really bulky, travelers should keep their precious possessions on their bodies as they walk through metal detectors or high-tech imaging devices. Fine jewelry items that are not worn should be placed in a carry-on bag that should never be left unattended."

Burns added that travelers should never place their valuables in the plastic bowls that the TSA provides to hold smaller items. Bowls can tip over on the conveyor belts, seemingly sending small jewelry into another dimension where it is never seen again, according to Burns.

Here are a few more traveling tips from Jewelers Mutual…

• Pack light and take only the jewelry you’ll wear while traveling and at your destination. The 4-carat diamond ring you save for special occasions? Probably not. The pearls that go with everything? Definitely.
• List all the jewelry you’ll take with you. Make two copies. Take one copy with you and store it separately from your jewelry. Leave the other copy at home. Also helpful: take pictures or a video of your jewelry.
• Never put jewelry in checked baggage. Instead, wear it or stow it in your carry-on bag. If you wear it, take extra care by slipping a pendant inside a sweater or turning your ring so only the band shows.
• Put your jewelry in a favorite bag you’ll carry while traveling. Don’t leave your jewelry in an unattended car or suitcase.
• When checking into your hotel or condo, don’t hand your jewelry bag to hotel staff. Carry it personally.
• Always store jewelry in the hotel safe when not wearing it.
• Insure your personal jewelry against loss, damage, theft and mysterious disappearance wherever your travels take you, worldwide. So get the right insurance. Then relax, be yourself and have fun.