In less than two weeks, the iconic Ruby Slippers made famous by Judy Garland in the 1939 MGM film, The Wizard of Oz, will be pulled from the wildly popular “American Stories” exhibit at the Smithsonian’s National Museum of American History.

The 78-year-old slippers — which have been slowly deteriorating — will undergo immediate conservation care, thanks to the generosity of 6,451 backers who contributed nearly $350,000 in an October 2016 Kickstarter campaign. The funds are also earmarked for a state-of-the-art display case designed to protect the slippers from environmental harm.

The current damage has been attributed to the slippers’ exposure to light, humidity, oxygen and temperature fluctuations. The Smithsonian noted that their work will include determining the physical state of the slippers through scientific research and testing. This will help curators define the best methods for preservation and treatment, as well as the optimal case and exhibition design.

Dorothy’s Ruby Slippers are often called “the most famous pair of shoes in the world,” but the last day to see the slippers in their current state will be April 23. In about a year, the slippers will return as part of a new exhibition focusing on American popular culture. 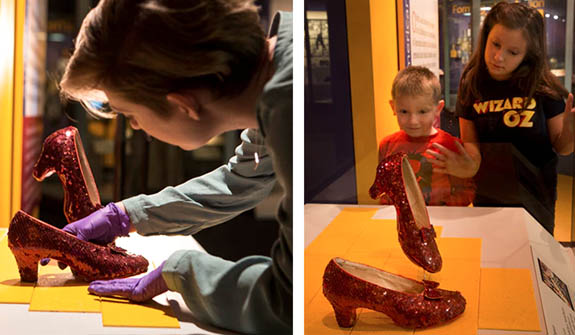 The slippers were donated anonymously to the Smithsonian in 1979 and have been on display for nearly three decades.

In the 1900 children’s novel The Wonderful Wizard of Oz by L. Frank Baum, Dorothy’s slippers were made of silver. According to film lore, screenwriter Noel Langley recommended that they be changed to ruby red so they would stand out better on the yellow brick road when shot in brilliant Technicolor.

MGM’s chief costume designer Gilbert Adrian created multiple pairs of Ruby Slippers for the film, but only four pairs are known to still exist. The Smithsonian’s pair is the one Dorothy wore when she followed the Yellow Brick Road. The felt soles are heavily worn, suggesting they were the 16-year-old Garland’s primary pair for the dance sequences.

A second pair was stolen from the Judy Garland Museum in 2005; a third pair was purchased in 2012 by Leonardo DiCaprio and other benefactors on behalf of the Academy of Motion Picture Arts and Sciences; and a fourth pair is owned by a private collector in Los Angeles.

Interestingly, Dorothy’s Ruby Slippers are not made of ruby at all. In fact, the bugle beads that prop designers used to simulate ruby proved to be too heavy. The solution was to replace most of the bugle beads with sequins, 2,300 on each slipper. The butterfly-shaped bow on the front of each shoe features red bugle beads outlined in red glass rhinestones in silver settings.

Admission to the National Museum of American History is free. It is located in Washington, D.C., on Constitution Avenue, between 12th and 14th streets N.W.