The largest pink diamond ever mined in Russia is on display in New York City this month. The ultra-rare 14.83-carat fancy vivid purple-pink diamond was mined in 2017 and cut and polished into an oval shape by Alrosa, one of the world's largest producers of diamonds. When unearthed from the Ebelyakh deposit in the Republic of Sakha (Yakutia), the gem-quality raw stone weighed 27.85 carats, the size of a large almond, and was almost free of inclusions. 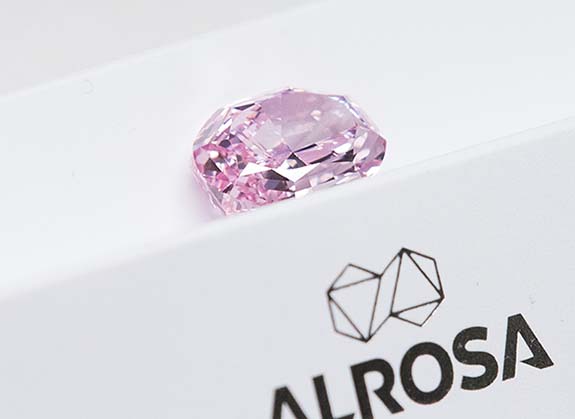 "The unique characteristics of the diamond make it an extraordinary, rare stone of high value.” said Evgeny Agureev, director of Alrosa's United Sales Organization. The mining company is conducting private viewings of the stone at its New York office through August.

Before this find, the largest pink diamond mined by Alrosa was a 3.86-carat stone found in 2012. In the last eight years, the company has only recovered three pink diamonds weighing over two carats.

“Pink diamonds… are considered to be the rarest and most precious of all, and the size and clarity of this specimen makes it one of the best to be discovered anywhere in the world in recent years,” added Yury Okoyemov, Deputy CEO of Alrosa. “I am sure that this diamond will be the most expensive in the history of Russia’s gem-cutting industry.”

Alrosa accounts for about 25 percent of global diamond production and 95 percent of all diamonds mined in Russia. It operates more than 20 diamond deposits located in Yakutia and the Arkhangelsk Region. According to the company, colored diamonds weighing more than 10 carats are recovered approximately once a year.

Rare fancy pink diamonds have consistently set records at auction. The Pink Promise, an oval-shaped, 14.93-carat fancy vivid pink diamond, was sold in 2017 by Christie’s Hong Kong for $32.5 million, or $2.2 million per carat. The Pink Legacy, an 18.96-carat fancy vivid pink diamond, sold for $50.4 million in 2018 at the Magnificent Jewels auction at Christie’s in Geneva. It was renamed The Winston Pink Legacy by its new owners at Harry Winston. The sale set a record price per carat ($2.6 million) for a pink diamond sold at auction.

Bloomberg recently reported that the closing of the Argyle Diamond Mine in Western Australia in 2020 could drive the price of pinks even higher.