Celebrity chefs Alex Guarnaschelli and Michael Castellon have taken their relationship to the next level — and the Food Network star has a dazzling ring to prove it.

Guarnaschelli took to Instagram on Saturday to show off her new emerald-and-diamond engagement ring and post the simple caption, "Ok @chefmike808, you’re on!" She punctuated the post with an engagement ring emoji.

Castellon, who is best known for winning Season 35 of Chopped, popped the question on Guarnaschelli’s birthday. 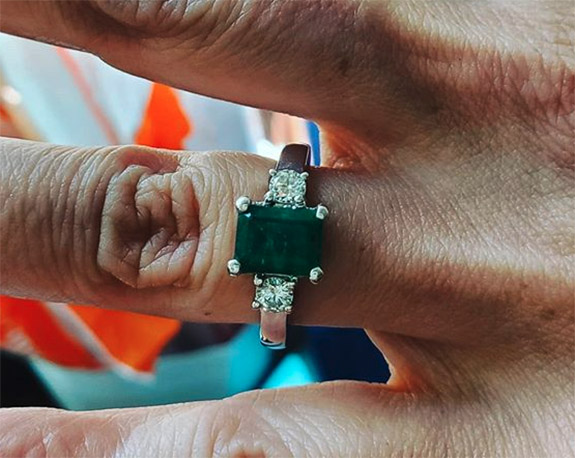 He also posted a photo of his fiancée's ring on his Instagram page. Instead of a standard caption, he strung together a series of hashtags, when combined, spelled out his sentiments. He wrote, "#she #said #yes engaged #boom #luckiest #guy #ever #happy #happy And #happy #bday @guarnaschelli"

Guarnaschelli revealed in a People magazine story that her boyfriend of four years delivered his surprise proposal after convincing her that he had spotted a baby deer near the side of the road. They had just finished a grocery run when he pulled the car over so they could take a closer look.

She told People, “So he's like, 'Shh. Come see it. It's so cute.' And I'm like, 'We're going to have to do something. We're going to have to call the animal welfare.' I'm already rolodexing the situation… And he goes, 'There's no deer.' I turn, and I look and he's on one knee. And he said, 'There's no deer.' He's like, 'This is why I have to marry you because you just believe me every time.' He said, 'Will you marry me?' and he gave me the ring."

The white-metal ring is set with a large emerald-cut emerald flanked by round, white accent diamonds. Guarnaschelli, who is the executive chef of Butter in New York City and has appeared on the Food Network's Chopped, Iron Chef America, All Star Family Cook-off, Guy's Grocery Games, and The Best Thing I Ever Ate, revealed on her IG stories that the ring is a Castellon family heirloom.

The couple met four years ago when Guarnaschelli dined at the restaurant where Castellon was working. Apparently, it was love at first sight.

"I went in to meet him and tell him the steak was delicious and that was it," she told People.

Guarnaschelli also dished that she and her fiancé are in no hurry to tie the knot, but when they do, it will be "a blowout" in the New York City area.

"I want a tri-state rager," she said.