A diamond-and-gold fish brooch valued at $5,000 tops the list of valuable donations anonymously dropped into Salvation Army kettles during the 2017 holiday season. All across the country, local chapters of the charity reported an outpouring of gifts that included bridal jewelry and solid gold coins. 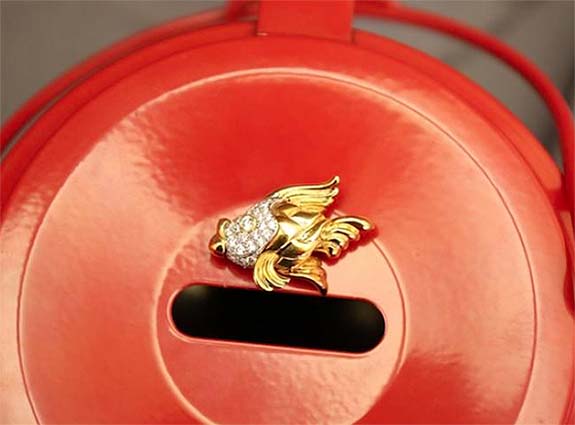 The fish brooch, which is made of 18-karat gold and features 32 diamonds weighing 1.58 carats, was found in a red kettle by a volunteer bell ringer in the Downtown Crossing area of Boston. It will be auctioned off, with the proceeds used to provide coats and warm meals to individuals in need this winter, the Salvation Army said.

“The kind soul that donated this brooch is emblematic of the generosity and charity we see in Massachusetts every holiday season,” noted Major David B. Davis, the Salvation Army’s Massachusetts Divisional Commander. “Her gift is a reminder that there are hidden heroes throughout the Commonwealth and we are grateful to them and all donors, large or small, who embody the spirit of the season and help us support individuals and families in need.” 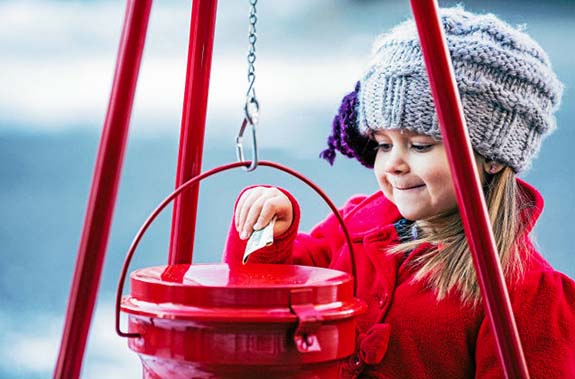 Boston-area residents have a history of generous giving, especially when it comes to jewelry items. In 2014, for instance, a widow made national headlines and inspired other similar donations when she dropped her diamond ring and her late husband’s wedding band into a kettle outside of North Station.

With the jewelry, she added a note that read: “To honor his memory, I donate this ring. I’m hoping there’s someone out there who made lots of money this year and will buy the ring for 10 times its worth. After all, there’s no price on love or the sentimental value of this ring. But money will help the kids. May everyone have a Merry Christmas, Happy Holidays and Happy New Year!”

The woman’s wishes were more than fulfilled when another Boston-area widow — and former Salvation Army bell ringer — offered $21,000 for the engagement ring and wedding band. Instead of taking possession of the rings, she requested that they be returned to their original owner.

Other generous gifts were reported from coast to coast. Here are some of the highlights…

• In Helena, Mont., an anonymous donor dropped a diamond ring into a Salvation Army kettle at the North Montana Albertsons. The ring, which is valued at $1,000, was wrapped in a $20 bill.

“It’s kind of amazing,” Helena Salvation Army Captain Rob Lawler told CBS affiliate KPAX. “We love when people put in a couple dollar bills, but when someone puts in something like this… it’s like giving a part of them.”

• In Roseville, Calif, a one ounce gold South African Krugerrand was placed in the Salvation Army kettle at the local Sam’s Club. The coin’s gold value is nearly $1,300 at today’s spot price.

“It took me a second to recognize it because I’ve never actually seen one before,” Lt. Steve Pavlakis of Salvation Army Roseville Corps told NBC affiliate KCRA. “And then I read that thing saying ‘Krugerrand, one ounce fine gold.’ It was like how kids probably feel, how I probably felt, on Christmas morning. It’s just so exciting to know that someone trusted us to bless us with that donation.”

• In Mount Pleasant, Wis., a diamond engagement ring and wedding band tied together with a blue ribbon was deposited into a Salvation Army kettle a the local Piggly Wiggly. The set has an estimated value of $800 to $1,000.

“You never know the reason behind why someone would give a wedding set,” Major Ken Nicolai, corps officer of the Racine Salvation Army, told journaltimes.com. “But we want them to know that it’s going to help a lot of people.”

The Salvation Army red kettle program dates back to 1891, when Salvation Army Captain Joseph McFee was determined to do something about the hunger problem in San Francisco. During the holiday season, he resolved to provide a free Christmas dinner for the destitute and poverty-stricken. He only had one major hurdle to overcome — funding the project.

According to The Salvation Army’s official website, McFee’s red kettle idea was inspired by his days as a sailor in Liverpool, England. There, he remembered an iron kettle called “Simpson’s Pot” into which passers-by tossed a coin or two to help the poor.

The next day McFee placed a similar pot at the Oakland Ferry Landing at the foot of Market Street. Near the pot, he placed a sign that read, “Keep the Pot Boiling.” He soon had the money to provide good meals to the needy on Christmas Day.