The British tourists who became internet celebrities after a video of them losing their engagement ring down a utility grate in New York City went viral returned to the U.S. on Thursday to appear on the Ellen show.

During the emotional eight-minute segment, the couple finally got their ring back, met the hero detectives who rescued it, hit the reset button on their marriage proposal and received a whopping $10,000 wedding gift from the show.

Host Ellen DeGeneres recounted to her studio audience how John Drennan had proposed to Daniella Anthony in Central Park on November 30, but the diamond engagement ring didn't fit properly — it was way too big. Although Anthony was worried that it might slip off, Drennan insisted that she wear it as they attended a Broadway show and toured the city. 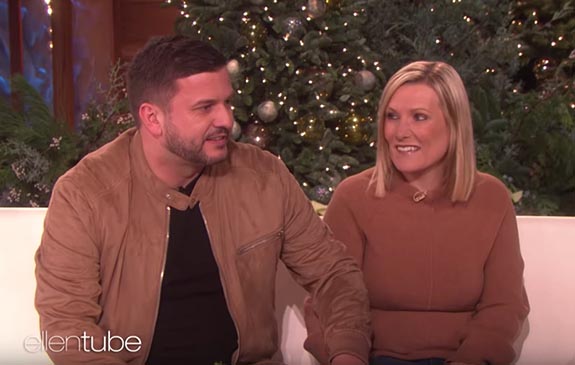 Brennan explained, "I just said, 'Daniella we've just got engaged. Ten years we've been together. Ten years you've waited on this ring. Come on, it's staying on your finger. It'll be fine.'"

Later in the evening, while walking in Times Square, Drennan reached for Anthony's hand and accidentally jostled the ring off her finger. The ring bounced twice on the sidewalk and then disappeared into a utility grate.

Surveillance video timestamped 11:59 p.m. caught the exact instant when the ring fell through the grate and the panic that ensued as the couple tried to figure out what to do next. The video shows Drennan belly-down on the sidewalk, peering helplessly through the grate.

The couple reportedly flagged down police officers on the night of the incident, but they were not able to access the ring in the darkness. The couple returned to the UK the next day without filing a police report or providing their contact information.

What they didn’t know was that the NYPD was not about to give up the search. On Saturday morning, Detectives Joseph Bucchignano and Brian Glacken were back at the scene. They removed the grate, descended into the muck eight feet below the sidewalk and pulled out the engagement ring.

With the ring in their possession, the next step was to find the couple.

On Saturday, the NYPD posted to Twitter the surveillance video and still shots of the couple walking through Midtown. They also posted a photo of the cleaned-up ring. The caption: “WANTED for dropping his fiancée’s ring in @TimesSquareNYC! She said Yes – but he was so excited that he dropped the ring in a grate. Our @NYPDSpecialops officers rescued it & would like to return it to the happy couple. Help us find them? Call 800-577-TIPS.”

The story became a viral sensation, and by the next day — December 2 — the newly engaged Brits had come forward as the mystery couple.

DeGeneres surprised the couple by introducing the two detectives responsible for saving the ring. Bucchignano and Glacken walked onto the set, where they exchanged hugs with the appreciative couple. The officers were also visiting the show to hand-deliver the ring to the couple.

Drennan used this opportunity to propose to Anthony — for a second time — on national television. Before taking the ring out the box, he jokingly asked DeGeneres if there were any utility grates on the set.

DeGeneres concluded the segment with one final surprise for the couple, a super-sized check in the amount of $10,000.

The couple is planning a 2020 wedding.

Check out the full segment below…