An Australian woman named Anna wore her engagement ring around her neck for 18 months without realizing it.

Anna’s boyfriend, Terry, had given her a hand-carved necklace made out of Huon pine — a variety native to Tasmania — for their one-year anniversary in 2015. Little did she know that hidden in the center of the unique keepsake was a secret compartment containing a diamond engagement ring.

“I had always loved the idea of giving someone a gift where they didn’t know its true value,” Terry told metro.co.uk.

Anna cherished the thoughtful gift and wore it continuously for the next year and a half.

Terry planned to propose to Anna last fall on a trip to Smoo Cave in northern Scotland. It was a place the couple dreamed of visiting since they first met, and “smoo,” appropriately, is an old Norse word meaning “hiding place.”

Before they got to their Scottish destination, Terry feared that his surprise might be foiled. For instance, he worried that the X-ray machine at airport security might expose the precious metal-and-diamond treasure tucked in the wooden necklace. It didn’t.

Months earlier, Terry learned that a local blacksmith had admired Anna’s carved necklace and that his girlfriend had contemplated trading it for some of the blacksmith’s work. She didn’t. 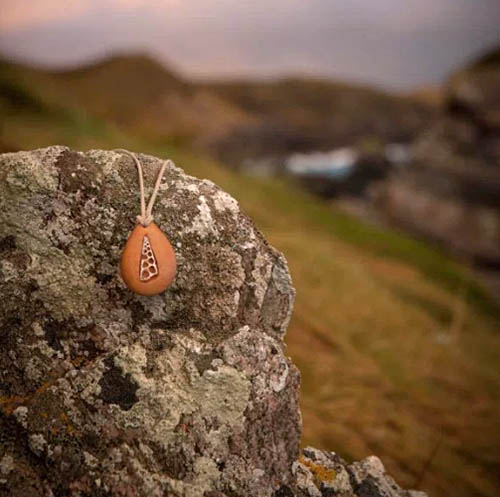 Finally at Smoo Cave, Terry convinced Anna to take off the necklace so he could photograph it against a rocky backdrop. After taking the shot, he used a knife to crack open the seal that kept the two halves of the necklace together.

With his camera focused on the couple and set on automatic, he went down on bended knee and slid the opposing halves of the necklace apart to expose the engagement ring inside. 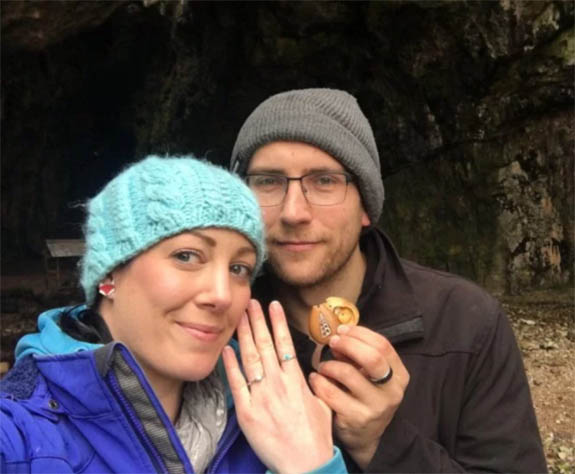 “She stood there with this completely confused and dumbfounded look on her face,” Terry told the Huffington Post. “And when she finally worked out what had just happened, she yelled, ‘Yes!’ and pounced on me.”

After she was able to collect her thoughts, Anna expressed some lighthearted objections to her fiancé’s clever — but risky — ruse.

“Wait, it’s been in there the entire time?” she yelled. “I could have lost it, you… idiot!”

The couple is now saving to purchase a home, which promises to be the venue of their wedding.

Credits: Images courtesy of the couple.