Alrosa recently conducted a media preview in Moscow to showcase a portfolio of its most dazzling finds, in hues ranging from lush pink to bright yellow. The star of the show was a 14.83-carat pink oval diamond sourced at the Ebelyakh deposit in Yakutia, Russia, in 2017.

At the time of its discovery, the pink diamond was billed as the largest pink diamond ever mined in Russia. The smooth-surfaced alluvial diamond measured 22.47 mm x 15.69 mm x 10.9 mm and weighed 27.85 carats. The previous record holder was much smaller at 3.86 carats.

Alrosa Deputy CEO Yury Okoyemov said that due to its size and clarity, the rough gem was “one of the best to be discovered anywhere in the world in recent years.” 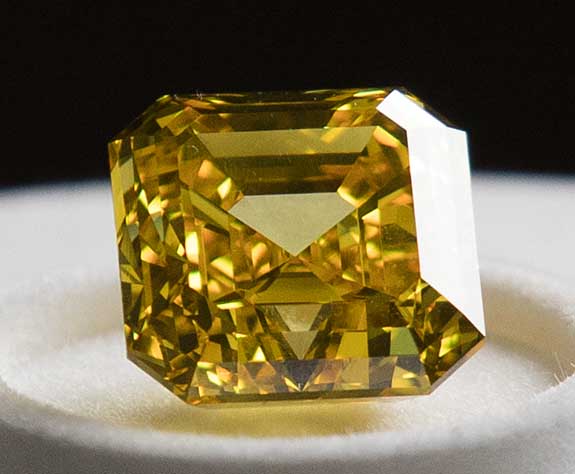 The largest stone in the exhibition was a deep yellow Asscher-cut diamond, weighing 20.69 carats. It was cut from a raw crystal with a rare honey hue, which weighed 34.17 carats and had the distinction of being the largest yellow diamond mined in Russia in 2017.

A third standout in the collection was a pink-purple cushion-shaped diamond weighing 11.06 carats. Alrosa noted in a press release that the Gemological Institute of America has recognized the gem to be the largest of its color in the world.

Describing the rarity of gem-quality colored diamonds, Okoyemov offered this telling statistic: "Out of every 10,000 natural jewelry-class diamonds mined, only one will be colored. And large colored diamonds are even rarer."

One of the reasons Alrosa is making such a big play in the colored diamond market is the strength of this niche sector. Okoyemov cited market analysts, who reported that the average price for colored diamonds has risen consistently by 12% a year during the last few decades.

“The diamonds we are now exhibiting are completely unique, and each of them perfectly embodies the Russian art of gem cutting," Okoyemov added. "We calculate that the huge potential of [our colored diamonds] will soon enable Alrosa to become the leader in the international market.”