Named after two of the most revered and powerful Olympian deities, Apollo and Artemis, this exquisite pair of diamond earrings — one blue, one pink — could fetch upwards of $68 million at Sotheby’s Geneva on May 16. 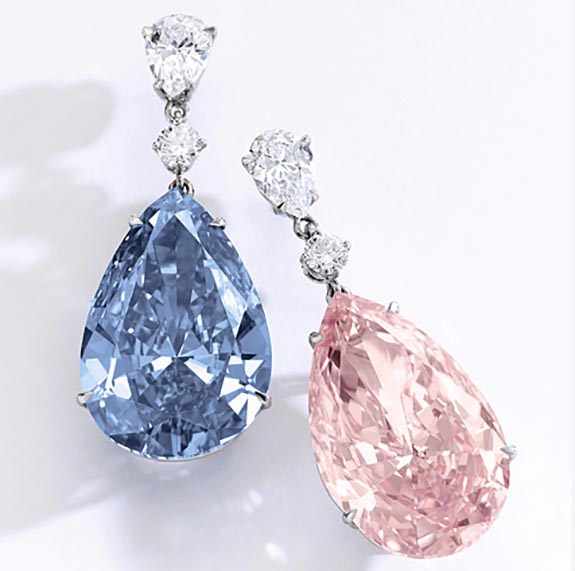 Although Sotheby’s is promoting the pear-shaped diamond earrings as a pair, they will be sold as individual lots. “The Apollo Blue” is a fancy vivid blue diamond weighing 14.54 carats, while “The Artemis Pink” is rated fancy intense pink and weighs 16.00 carats. The Apollo Blue carries a pre-sale estimate of $38 million to $50 million. His twin sister, Artemis, is expected to fetch between $12.5 million and $18 million.

“The Apollo and Artemis diamonds will be the stars of our May sale in Geneva — by far the most important pair of earrings ever offered at auction,” noted David Bennett, worldwide chairman of Sotheby’s International Jewelry Division. “These exquisite colored diamonds are enormously rare and each is a wonderful stone in its own right. Together, as a pair of earrings, they are breathtaking.”

According to Sotheby’s, The Apollo Blue is the largest internally flawless fancy vivid blue diamond ever to be offered at auction. The Gemological Institute of America graded it as a Type IIb diamond, a purity rating earned by less than one-half of 1% of all diamonds. The Apollo Blue could be compared favorably to the famous “Oppenheimer Blue,” which set a record last year when it yielded $57.5 million at Christie’s Geneva. That stone weighed 14.62 carats and had a clarity grade of VVS1.

The Artemis Pink, earned a Type IIa rating from GIA, another category describing the most chemically pure type of diamonds. The pink diamond has a clarity grade of VVS2. Both diamonds boast exceptional optical transparency.

In Greek mythology, the twins Apollo and Artemis were the offspring of Zeus and Leto. Apollo was known as the god of the sun, archery and prophecy. Artemis was revered as the goddess of the moon, chastity, the hunt and the natural environment.

Apollo and Artemis are headlining a five-week promotional tour in the lead-up to the May 16 auction. The tour started in London on Friday and will continue to Dubai, New York, Hong Kong, Taiwan, Singapore and Geneva.