The senior captain and his Crimson Tide teammates were basking in the glory of a stunning 26-23 overtime victory over the Georgia Bulldogs at Mercedes-Benz Stadium field in Atlanta when he unexpectedly popped the question to his girlfriend, former Alabama basketball player Nikki Hegstetter.

ESPN captured the scene as the 6’4″, 315-pound Bozeman — in full football gear and with his hands still taped — cast aside a newspaper that he had cleverly used to conceal a crimson-red ring box.

Hegstetter was overwhelmed with emotion as Bozeman went down on one knee and snapped open the box, revealing the ring for the first time.

“Will you marry me?” asked a smiling Bozeman.

Unable to speak, Hegstetter covered her mouth with both hands and nodded her answer. Then she crouched down to get a better look at her engagement ring and started to cry. 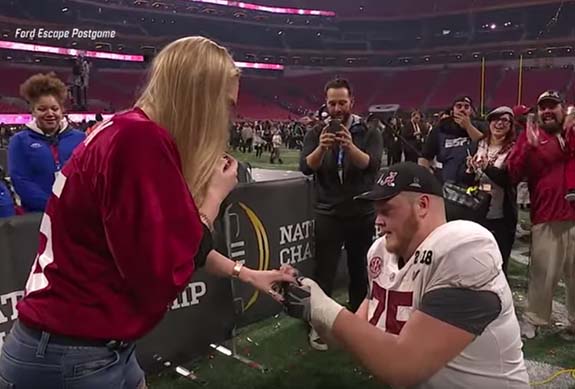 Bozeman placed the ring on her left ring finger while Crimson Tide fans applauded and documented the romantic moment with their cell phones. 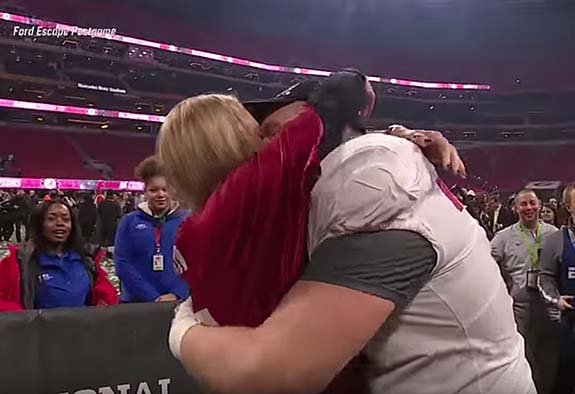 According to AL.com, the pair had done some preliminary ring shopping, but Hegstetter had no idea that a proposal was imminent. The only people who knew what was about to go down were Bozeman’s fellow offensive linemen. He gave them a heads-up five minutes before popping the question.

Bozeman also revealed that his surprise proposal was contingent on the success of his team. If the Crimson Tide lost, he would have waited for another day.

Alabama had trailed by 13 points at halftime and Bozeman was probably thinking of contingency plans. Fortunately for Bozeman, Hegstetter and the Alabama fans, freshman quarterback Tua Tagovailoa was able to come off the bench to lead a second half rally. A 41-yard pass to DeVonta Smith in overtime sealed the victory.

Bozeman is reported to be among the top centers in the upcoming NFL Draft.