A star was born Tuesday when a 59.6-carat, flawless, fancy vivid pink diamond shattered the world record for the highest price ever paid for any gem at auction. The Pink Star’s hammer price of $71.2 million at Sotheby’s Magnificent Jewels and Jadeite sale in Hong Kong easily surpassed the $57.5 million achieved in May of 2016 by the previous record-holder, the 14.62-carat Oppenheimer Blue diamond.

The Pink Star was hardly a stranger to Sotheby’s auction block. Back in November 2013, the extraordinary diamond made headlines around the world as it fetched an astounding $83 million in Geneva. All the fanfare turned sour a few months later when the buyer defaulted on the payment. Sotheby’s paid the guaranteed minimum of $60 million and took ownership of the gem. In 2016, the auction house revealed that two firms — Diacore and Mellen Inc. — had purchased an interest in the Pink Star, with the third partner being Sotheby’s. 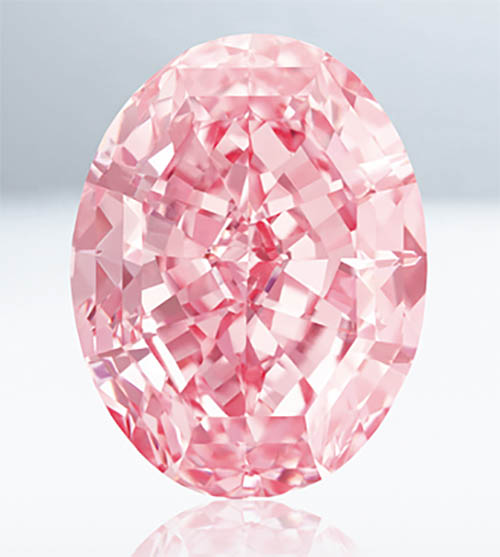 The newest owner of the Pink Star is Hong Kong-based luxury jewelry retailer Chow Tai Fook, which outbid two other contenders in an intense, five-minute contest. Chow Tai Fook operates more than 2,000 jewelry and watch stores throughout China. In 2016, the company purchased the Aurora Green diamond for $16.8 million at Christie’s Hong Kong.

Diacore (formerly Steinmetz Diamond Group) was responsible for taking the original 132.5-carat rough diamond and fashioning it into an oval mixed-cut masterpiece — a process that would take two years. The gem had been unearthed by De Beers in Botswana in 1999. The gem was unveiled to the public as the Steinmetz Pink in 2003. It was sold four years later to an undisclosed buyer.

Sotheby’s pre-sale estimate had been set at $60 million, a sum that still would have earned the world record. The final sale price exceeded the estimate by nearly 19%.

It is believed that pink diamonds owe their color to the effects of intense pressure and heat while they were still deep within the earth. These factors caused distortions in the diamond’s crystal lattice that influence the way the gem absorbs green light, thus reflecting a pink hue.