The community of Cedar Park, Texas, is singing the praises of 8-year-old Hudson Komendera, who not only spotted a lost engagement ring in a parking lot and helped reunite the ring with its rightful owner, but also donated his $300 reward to a local family that lost two boys in a tragic car crash.

Hudson and his mom, Stacy Komendera, had just gotten out of their car at a local shopping center last week when something on the sidewalk caught the little boy’s eye.

“I found a ring,” Hudson exclaimed.

Stacy told a reporter for ABC affiliate KVUE that, at first, she didn’t think much of the discovery.

She recalled telling her son, “Great, we’re at the Dollar Tree, honey.”

Young Hudson told the reporter, “She didn’t believe me. She thought it was a fake little plastic ring.”

What Hudson held in his hand was a slightly bruised, but very valuable, diamond engagement ring. Stacy decided to secure the ring and attempt to find its rightful owner.

Meanwhile, fellow Cedar Park resident Faith Goldberg was distraught over losing her cherished engagement ring — a ring her husband purchased for her less than a year ago to symbolize their 17 years together. Goldberg had lost the ring while shopping a few days earlier and was pretty sure it was gone forever.

Goldberg’s husband told her over and over that the ring could be replaced and that everything was OK. But, Goldberg wasn’t about to give up without a fight. 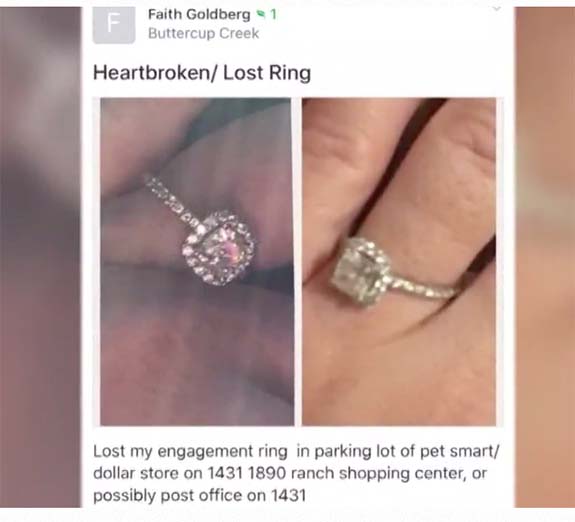 Under the title, “Heartbroken/Lost Ring,” she posted two photos of the engagement ring to the community social media site Nextdoor.com, along with a caption offering a clue to where it may have been lost.

She wrote, “Lost my engagement ring in parking lot of pet smart/dollar store on 1431 1890 ranch shopping center, or possibly post office on 1431.”

By coincidence, Stacy was checking Nextdoor.com to learn about a car accident that had just claimed the lives of two young boys. One post down from the item about the accident was Goldberg’s desperate plea. The photo matched Hudson’s find exactly.

Instead of contacting Goldberg right away, Stacy brought the damaged ring to a local jeweler to be fixed and shined up.

Once the ring looked good as new, it was time to reunite it with its rightful owner.

A KVUE news team was on hand when Goldberg met her little hero for the first time.

“I honestly didn’t think I’d see it again, but I did,” Goldberg told KVUE.

Goldberg rewarded Hudson with a well deserved hug, a gift card and $300 in cash.