A rare 93-carat natural black diamond — one of the largest in the world — recently made its debut at the Natural History Museum in London. The limited engagement will run for 12 months.

The “Anastacia Diamond” was cut from a rough gem weighing just over 300 carats, which likely originated from Brazil. The rough diamond was acquired by the owner's family during the late 1800s in Goa, India, which was well known as a gem-cutting center at the time. The gemstone has remained with the family since. More recently, the stone was named for the owner's daughter.

The diamond was set into a pendant that features a large crescent moon and three yellow-diamond stars on the front and a depiction of the constellation Al-Dubb al-Akbar (a.k.a Ursa Major) rendered in diamonds on the back. The pendant, which includes 41 colorless diamonds and 26 yellow diamonds, was designed specifically for the diamond's namesake. 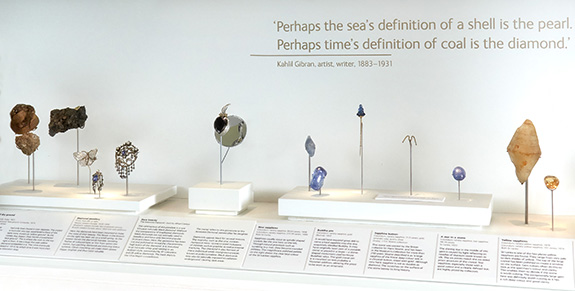 The “Anastacia Diamond” is now the largest diamond of any color on display at the museum. It can be see in "The Vault," alongside other impressive gems and minerals, including the Aurora Pyramid of Hope (the largest collection of fancy colored diamonds currently on display in the world), the 1,384 carat Devonshire Emerald and the recently discovered Winchcombe Meteor.

Black diamonds are different from other colored diamonds because they do not get their color from chemical impurities, such as nitrogen, hydrogen or boron, in the diamond’s makeup. Instead, black diamonds owe their color to numerous dark inclusions (mostly graphite). Their opaqueness is caused by a “polycrystalline” structure that inhibits the reflection of light.

The “Anastacia Diamond” is 25.5 carats larger than the world-famous Black Orlov diamond, which was discovered in the early 1800s in India and weighs 67.50 carats. That gem had been previously displayed at the American Museum of Natural History in New York City and the Natural History Museum, London.

The London museum is recognized as a leading science research center and the most-visited natural history museum in Europe. The Natural History Museum in London welcomes more than five million visitors each year, while its digital content reaches hundreds of thousands of people in more than 200 countries each month. Touring exhibitions hosted by the museum have been seen by approximately 30 million people in the past 10 years.

The museum is also the custodian of one of the world’s most important scientific collections, comprising more than 80 million specimens. The museum’s 300 scientists continue to represent one of the largest groups in the world studying and enabling research into every aspect of the natural world.